About 300 species confined to the Falkland Islands and temperate and tropical Latin America, from Mexico as far south as Fuegia, but particularly centred on Peru and Chile. Predominantly associated with the Andean zones, they range from shrubs and subshrubs to perennials and annuals. The highly distinctive flowers consist of two separated lips joined by an almost non-existent tube, the upper lip very much smaller than the lower, hooded or flat with an inrolled margin, or pouched. The conspicuous lower lip is always baggy to some degree, either indated like a little balloon, or swollen like a sausage around the apex. They are borne in few or many flowered corymbs (some almost like umbels) and complicated elongated thyrses. One or two dwarf alpine species are single flowered. Despite coming in all shapes and sizes, very few and calceolarias are coloured anything but some shade of yellow, including lemon, sulphur and gold, although this may be relieved by spotting, usually reddish, inside the throat or pouch. A few exceptions are bicoloured in shades of purple and cream, others are just plain white, orange, purple or violet. Although virtually impossible to confuse with any other genus when in flower, there can be problems with identification of some species. Most accessible literature is singularly unhelpful or confusing. As will be seen, even the names of one or two of the popular species have been fraught with snags. These difficulties stem in part from a broad similarity in appearance, but also from the way they have become isolated into local populations along the Andean chain. Where such confusion still exists, available information is coordinated in the text and will hopefully provide helpful comments until a full revision becomes available. The recent monograph by Molau in 'Flora Neotropica' has been invaluable in preparing this account. Regrettably there was nothing comparable to help with the temperate section.

Calceolarias are valuable for their very distinctive appearance and general latish summer flowering period. The choicest species, and any new introductions, are best grown in containers in the alpine houses, especially during the winter period. Several others can be grown outside in light, fertile soil that never becomes drought-stricken. The various species exploit a wide range of habitats, with only a minority demanding continually damp conditions. Before deciding how best to cultivate a particular calceolaria, always try to obtain accurate information on the kind of habitat and condition favoured by that species in the wild. It has not been possible to provide that here in every case, as some early records lack any details of this sort. Propagation by seed in spring, thinly sown and barely covered, division in early spring or cuttings in late summer. 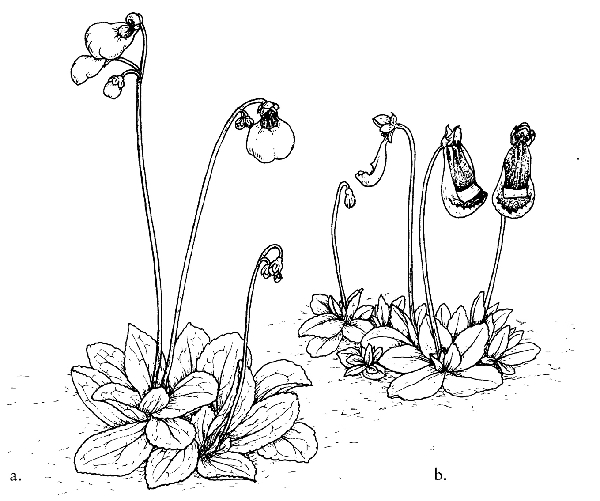