Clump to colony-forming, spreading by fleshy, branched rhizomes containing an orange-red sap. Leaves solitary, rounded-cordate, palmately divided into seven broad, often overlapping lobes with scalloped edges and a bold network of veins, to 15cm or more wide, blue-grey when mature, long-stalked. Flowers solitary, glistening white, with eight to sixteen narrow petals at first enclosed by the rolled young leaf beside it, but then over-topping it and expanding to 4cm in diameter, spring. S.c. 'Multiplex' (syn. 'Flore Pleno' and 'Plena'), has fully double, longer-lasting flowers. S.c. forma colbyorum is pink-flowered, but it appears no longer to be in cultivation, though there are several clones, such as 'Amy' and 'Peter Harrison' with pink-backed flowers. Quebec to Manitoba south to Kansas and Kentucky, in moist and drier woods, also in the open by streams and on rocky slopes. [Pl.428,429]. 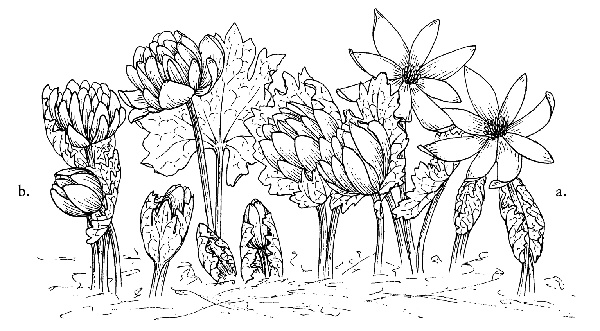