Around fifty known species of tufted and cushion-forming perennials from Central Southern Asia, particularly Iran and Afghanistan. Many are of very localised distribution and it seems inconceivable that there aren't many more that remain to be discovered in remote valleys. They are chasmophytes, growing predominantly on north facing limestone cliffs and cave entrances. Many species were introduced into cultivation in the 1960s and 1970s but due to political and security considerations little exploration was possible for over twenty years. Around the turn of the century several new species were introduced from Iran along with new material of existing species. Since around the same time a large number of attractive hybrids have entered cultivation, primarily originating from Germany. The genus is closely related to Primula although no single character or difference can be applied, but rather a combination of characters; woody stems, revolute leaf-venation, 5-valved fruit-capsule, few-seeded capsules, the presence often of woolly as well as powdery farina and various details of both pollen and chromosomes (cytology) serve to distinguish Dionysia. Flowers can be borne in an inflorescence with several whorls of flowers, in a simple umbel or, in the majority of those cultivated, they are solitary, being borne directly on the leaf-rosette. As in Primula the flowers are either pin- or thrum-eyed, being borne on separate plants. In D. involucata they are homostylous, i.e. all of the same type. Many species possess a pungent aromatic smell, especially from the fresh or dried leaves; this is reminiscent of that of some Primula species.

Acronyms referred to under individual species are as follows:

Dionysias present a challenge to the grower but they are far from intractable, rather they are unforgiving of neglect. A few species, DD. aretioides, curviflora, involucrata and tapetodes, are considered relatively easy to cultivate as are many of the hybrids, but the others are classed as difficult or very difficult including some hybrids. It is essential that composts are well drained, typically containing no more than 20% John Innes number 2 with the remainder comprising inorganic constituents such as perlite, grit and pumice. Too rich a compost will result in soft lush growth which is not only out of character but can result in short-lived plants. Most species, especially the tight cushion-forming ones, can be grown in blocks of tufa. Plants are best grown in terracotta pots in a plunge of sand or grit. Watering has to be undertaken with care, watering only the plunge during the autumn and winter when plants are most at risk from botrytis infection. During the growing season, however, plants should be given ample, but not excessive water. At no time should they dry out. Few species will tolerate any moisture on their foliage, especially those with soft, tight, hairy cushions. Light shading is advisable especially in the spring when growth commences, and summer, otherwise severe scorch may result. All species are perfectly hardy in an unheated alpine house with as much ventilation as possible. Many growers have fans running continuously, especially in smaller alpine houses. Some growers have had limited success outdoors in a trough or raised bed, providing they are protected by a sheet of glass during the autumn and winter. Plants should be kept clean at all times, carefully removing diseased portions of old flower remains, which could be the site of fungal infections. Plants should be potted-on with great care, the best time being once growth has started in the spring. Pieces of rock or tufa or a layer of sharp grit placed under the collar of the plant will help to keep plants compact as well as helping to keep the collar dry. Propagation can be difficult, except for some of the easier species. Patience is the key to success, for cuttings are small and difficult to handle and often take a long time to root. Generally single rosette cuttings are taken (late May to mid-summer), with as long a stem as possible and stripped of the lower leaves. These are then placed in pots or trays of fine pumice or sharp silver sand, that has first been soaked and drained. The moment cuttings have rooted (indicated by renewed growth) they must be potted-on into the usual compost. Both cuttings and newly potted plants should be placed in a cool, airy, but not too dark, a position until they have settled down. To produce seed of all species except D. involucrata (see text) there must be both a pin-eyed and a thrum-eyed plant of the same species in a collection, if not, then flowers of the missing type should be sought from another grower. Unfortunately several species only exist in cultivation in one or other form. Pollination is best achieved by hand using a fine camel-haired brush, transferring pollen from one type to the stigma of the other. Ripe seed capsules have to be sought with care on the cushion-forming species and can be easily overlooked. Some progress has been made with micropropagation techniques and this may, in the long run, make the rarer species more readily available. The main problems with the species are fungal infections, especially botrytis, in the autumn and winter. Unfortunately due to recent restrictions there are no effective chemicals available to amateur growers so regular inspection and prompt removal of affected rosettes is essential. Pests are not a particular problem. Aphids are not usually an issue and red spider mite only seem to affect D. archibaldii and it's hybrids. Tiny green caterpillars can disfigure a plant if not detected and removed but are rarely fatal other than with very young plants. 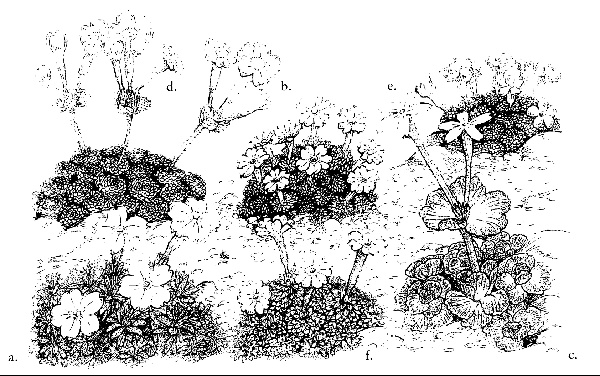