Corm tunic membranous or coriaceous splitting into rings at the base. Leaves green or slightly glaucous usually less than 1mm wide. Flowers 6-10cm tall, pale or deep yellow, sometimes striped or flecked outside, rarely white, usually with black basal lobes to the anthers, late winter to spring. Balkan countries, Romania and Turkey, on grassy slopes or sparse woodland up to 2200m. Cultivation is not difficult in a bulb frame but the wild forms do not thrive in the garden as readily as do the garden cultivars. C. chrysanthus has given rise to many named cultivars which, because of their vigour and ease of cultivation and propagation, have become popular garden plants. Some are undoubtedly hybrids with various subspecies of C. biflorus and they cover a wide range of colours. Well over a hundred named clones have been in cultivation though many of the early ones including these raised by E.A. Bowles and named after birds are now very rare or have been lost. The following are some of the more distinctive and garden-worthy currently available:- Yellow ground: 'Cream Beauty', 'E.A.Bowies', 'Zwanenburg Bronze', 'Gipsy Girl', 'Ushack Orange'. Blue ground: 'Blue Pearl', 'Blue Peter', 'Princess Beatrix', 'Skyline'. White ground: 'Blue Bird', 'Warley White', 'Snow Bunting', 'Ladykiller', 'Miss Vain'. 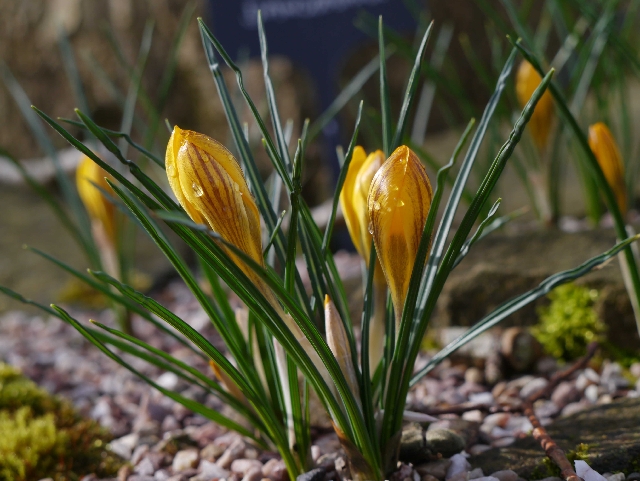